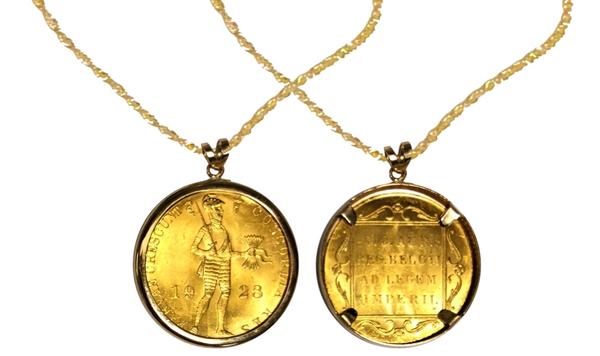 In addition to it's exquisite beauty, the Netherlands Trade Ducat makes for a unique and memorable gift to commemorate either an annviersary or relationship milestone.  The motto Concordia Res Parvae Crescunt on the obverse of the coin translates to the sentimentally appropriate: "the union makes small things grow."  The obverse of the famed ducat coin also depicts a knight holding a bundle of arrows signifying the unity of the six northern provinces under the 1579 Union of Utrecht -- a declaration of independence from Spain.  The legend on the reverse is also beautiful in its pure simplicity, and translates to "money of the provinces of the United Netherlands according to the law of the empire".

Please note:  All pendants are made to order.  Please state your preference as to which side of the coin you'd like to see as the front (no prongs, clean lines) and the back (prongs) in the special instructions section of the order form (simply state: "(left/right) of image as pictured on (front/back)").  Orders are automatically combined with chains to provide a package/bulk discount.  You do have the option to order the pendant only (by phone), but at an added cost to the price published above.

Historical Note:  The first Netherlands trade ducat was issued in 1487 under Phillip the Fair and a coin very similar to the one depicted above has been minted more or less continuously from the early 1600s on. The net fine weight of 3.5 grams gold never changed to the modern era. The trade ducat is minted as a gold bullion coin even today. Only the Venetian ducat has enjoyed greater longevity.