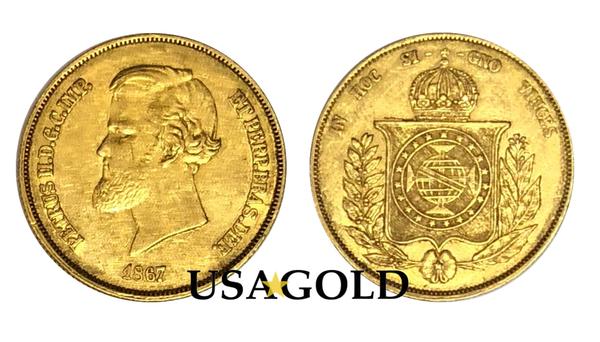 Dom Pedro II was born in Rio De Janeiro on December 2, 1825.  Upon the abdication of his father in 1831, he ascended the throne at the age of six.  He was officially crowned emperor of Brazil ten years later upon reaching adulthood.  Pedro II gave Brazin 49 years of domestic peace, prosperity and progress, ending his rule in 1889.  During his reign, "Union and Industry", the first paved road, was built; the first steam-engine started running; the postal stamp was instituted; the submarine wire was installed and the telephone was inaugurated.  On that note, and interesting bit of trivia is that Pedro II is believed to have been the frist Brazilian to speak on a telephone.

The obverse of the Brazilian 20,000 Reis coin features the image of Pedro II with ethe Latin legend "Petrus II.D.G.C.IMP ET PERP.BRAS.DEF" meaning "Peter II by Grace of Gold and Perpetual Defender of Brazil".  The reverse of each coin shows the Imperial Arms and the Latin Legend, "IN HOC SIGNO VINCES"; translated, "In this sign, you wil conquer".