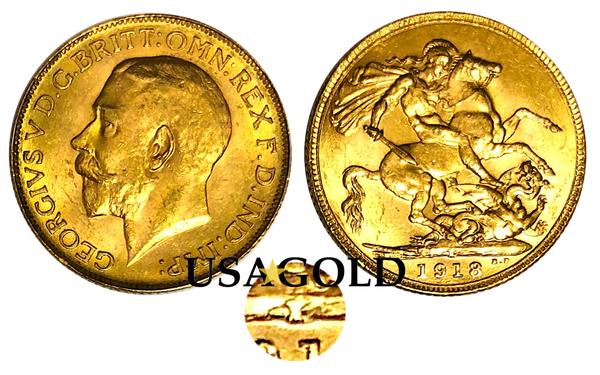 Gold Sovereigns were minted in India for just one year, 1918.  A  mere 1.3 million were minted during this one year of production, making these the second rarest mint-marked Sovereign (second only to Canada minted coins).  The "I" mint Sovereigns are highly elusive and nearly impossible to acquire in quantity.

Historical Commentary: At its height in 1921, the British Empire governed roughly one-quarter of the world's population (approx. 525 million people) as well as just under a quarter of the world's total land area (15 million square miles). As history's largest empire, Britain's rule was so expansive that the sun never set across its lands. Queen Victoria's prized dominion was India, brought under the rule of the Crown when the East India Company was deemed too inadequate to control the region in 1858. Queen Victoria named herself, "Empress of India" in 1876 and India was thereafter referred to as "Raj", the Crown Jewel of Britain's vast empire. It was not until World War II that Britain's rule of India came to an end when a deal was reached between the British Government and the Indian Independence Movement, led by Mohatma Ghandi, whereby the Indians would co-operate and remain loyal during the war, after which they would be granted independence.