Highlights
* Scarcity: Frederick 10 Kroners were minted for just two years (1908 & 1909) with a total mintage of just 461,000 coins.
* Price: Priced less per ounce than modern equivalents like 1/10 oz Eagles and Maples.
* Negotiability: Small denomination, roughly 1/8 of an ounce each offering divisibility.
* Availability:  Limited.  We have only 280 coins available.  All orders filled on first-come, first-served basis. 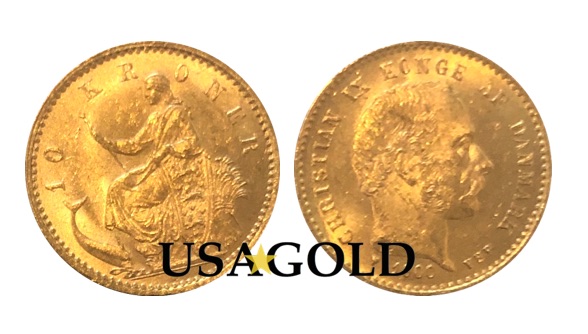 *Bonus: We also acquired a very small batch (just 50 coins) of the even scarcer, highly coveted 10 Kroner Mermaids as well.  These will be offered for $10/ea. more than the Fredericks and due to the extremely limited availability, are available by PHONE ORDER ONLY.

Historical Commentary: The Denmark 10 Kroner Gold Coins are among the most visually appealing, scarce and highly sought-after of the pre-1933 European gold coins.  To give you a sense of their relative rarity, only 461,000 Frederick VII and only 445,000 Christian X gold coins were minted in just 2 years each of total coin production in 1908/9 (Frederick) and 1913/17 (Christian). By comparison, single year mintages of British Sovereigns frequently topped 30 million pieces (Yet in this special, they're priced comparably!).

Issued from the 1500's, kroner is Danish for 'crown' -- a reference to its production at the king's mint. The gold kroner coins became the fixed standard of value and primary monetary instrument in Denmark, Sweden and Norway under the Scandinavian Coin Union in 1875. The Coin Union was instituted as a reaction to the recurring monetary crises caused by the undisciplined issuance of paper money. One such crisis led to the public burning of bank notes in 1728. Another in 1814 pushed the country toward an inflationary financial collapse and public rioting. It provided the region with fixed exchange rates and stability until it was abandoned at the onset of World War I.  Frederich VII acceded the throne at 63 years of age and was succeeded just six years later by his son, Christian X.