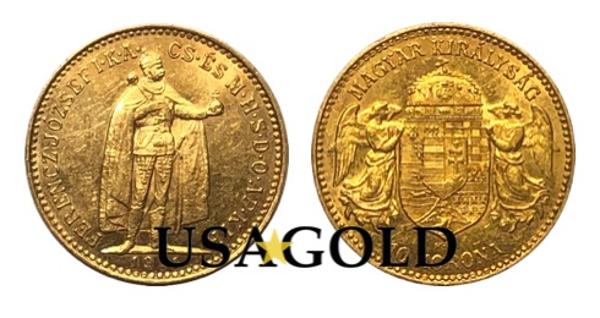 With a pair of heraldic Angels attending the Hungarian coat of arms on the reverse, a timeless representation of a standing emperor Franz Joseph on the obverse, and a stunning proof-like finish, the Hungarian Korona ranks among the most beautiful and coveted of all historic old-world European coinage.  Rarely available, our clientele are likely more familiar with the 20 Korona variety, which we’ve offered a handful of times over the past decade.  This marks the first time in our company history we’ve had the pleasure of offering the smaller 10 Korona.  Stifled time and again in our pursuit of such product by the simple reality that small denomination historic coinage was typically heavily circulated and rarely survived into the modern era in a satisfactory state of preservation.

Enter our January offer…the highest condition, and deepest position of the roughly 1/10 ounce 10 Korona we’ve ever heard of hitting the market.  A central component of the most dynamic Austo-Hungarian collection to see the light of day in decades - a collection we secured the entirety of in October - these 10 Korona are in a brilliant proof-like blend of Almost Uncirculated and Uncirculated condition.  Enhanced by a broader market condition where small denomination product is either unavailable or marked up exorbitantly, our January offer of 10 Koronas represents an opportunity for safe-haven investors to supplement their portfolio’s divisibility, negotiability and liquidity at a $100+ per ounce discount to any competitor offer of the modern 1/10 ounce American Eagles.

Historical Note:  Franz Joseph became emperor of Austria, which controlled Hungary along with much of central Europe, in 1848 at the age of 18.  It was during his reign that the old Hungarian Constitution was restored, and Franz Joseph was accordingly also crowned King of Hungary in 1867, creating the dual Monarchy of Austria-Hungary.  The two realms were governed separately with two parliaments and two administrations, but a common monarch, military and foreign office.

Hungary's tragic inflationary nightmare (1946) that followed World War II is generally considered by scholars to be the most virulent episode of hyperinflation in history - one that dwarfs in scale the better-known German experience of the 1920's.  In fact, the Hungarian hyperinflations holds the record for the largest denomination bank note ever issued by a central bank - 100 quintillion pengo.

In addition, history's largest monthly inflation rate was posted by Hungary in that period at 41.9 quadrillion percent - prices were doubling every thirtenn and half hours.  The cause of the inflation was the same as the cause of every other inflationay debacle in history, i.e. the government's uncontrolled and mismanaged issuance of paper currency.  Some historians believe that the Hungarian hyperinflation was instigated by Marxists who were determined to destory Hungary's middle and upper classes.  Whatever, the causes, if you happened to have been a Hungarian citizen who had the wisdom to own the nations most famous gold coin, the 10 Korona offered here, you would have survived the debacle, and, in fact, probably prospered.