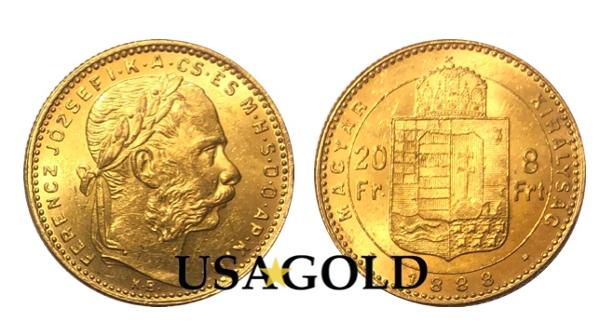 Offered for the first time in our 47 year company history, the Hungarian 8 Florint/20 Franc combines scarcity, beauty, and history in a manner matched by few historical European coins.  Just 5.6 million were struck from the years 1870-1891, making these among the scarcest of the Latin Monetary Union/20 Franc coinage, on par with rarely seen issues like the Tunisian 20 Franc and Finland 20 Markaa.  For those unfamiliar, in 1865, European countries standardized gold coin weights to match the French 20 Franc (.1867 oz) to facilitate cross-border trade.  The Austro-Hungarian Empire participated, but only until 1892, after which they switched to production of their own 20 Kroner.  The 8 Florints offered here are ‘original strike’ - which is a necessary and important distinction - as the 8 Florints were officially re-struck in later years bearing the date 1892 - a date one can find fairly easily.

As was customary at the Hungarian mint at the time, coinage was produced with a beautiful proof-like finish, and this particular group is no different, grading out to a highly lustrous and visually striking ‘Proof-like’ AU/BU+ condition.  The obverse bears the visage of Emperor Franz Joseph, and the reverse, a detailed and well struck image of the Hungarian coat of arms.  Despite their scarcity, we are offering these coins at a 2% discount to other far more common European coin issues of the era like Italian 20 Lira or French Angels, as well as extending additional discounts to purchases of 50 and 100 or more coins.  With only 500 coins available, and paired with the current pullback in gold prices, we encourage decisive action if you have an interest.

Historical Commentary:  Franz Joseph became emperor of Austria, which controlled Hungary along with much of central Europe, in 1848 at the age of 18.  It was during his reign that the old Hungarian Constitution was restored, and Franz Joseph was accordingly also crowned King of Hungary in 1867, creating the dual Monarchy of Austria-Hungary.  The two realms were governed separately with two parliaments and two administrations, but a common monarch, military and foreign office.

Hungary's tragic inflationary nightmare (1946) that followed World War II is generally considered by scholars to be the most virulent episode of hyperinflation in history - one that dwarfs in scale the better-known German experience of the 1920's.  In face, the Hungarian hyperinflations holds the record for the largest denomination bank note ever issued by a central bank - 100 quintillion pengo.

In addition, history's largest monthly inflation rate was posted by Hungary in that period at 41.9 quadrillion percent - prices were doubling every thirteen and half hours.  The cause of the inflation was the same as the cause of every other inflationay debacle in history, i.e. the government's uncontrolled and mismanaged issuance of paper currency.  Some historians believe that the Hungarian hyperinflation was instigate by Marxists who were determined to destory Hungary's middle and upper classes.