The Italian 20 Lira are among the most coveted and sought after of all pre-1900 historic European gold coins.  Minted with a stunning mirrored proof-like finish, these uncirculated coins are markedly scarcer than other well known Latin Monetary Union items like French Angels, Swiss Francs and Belgian Leopolds, and rarely surface in quantity.  Offered here for substantially less than a modern bullion equivalent, our September Special is a notable opportunity for our clients to efficiently accumulate fractional gold coin ownership and bolster the divisibility and negotiability of their overall gold portfolio, all while adding historical significance, scarcity and beauty to their heirloom positions of world gold coins. 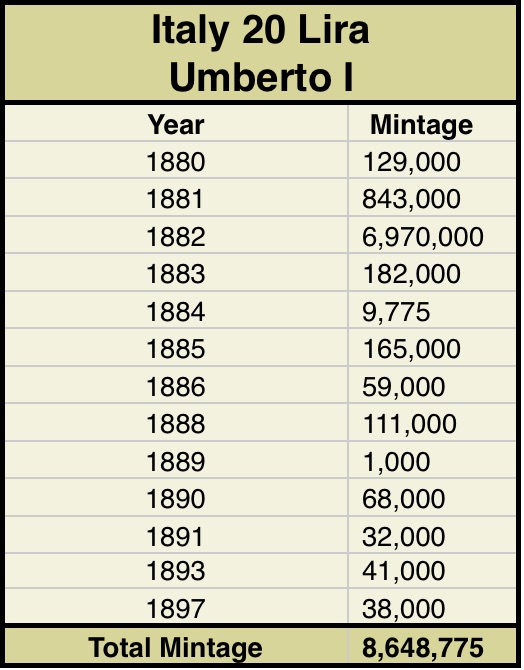 The number of Italian 20 Lira Gold Coins minted under the rule of King Umberto was relatively small when compared to other items in its genre (see mintage study to left).  Nearly all Italy 20 Lira featuring King Umberto that come to market are dated 1882. These items generally surface in a 'proof-like' uncirculated condition and are essential to any collection of 19th and 20th century gold coins. Despite the small mintage and generally high state of preservation, the pricing is favorable, making these one of the most coveted pre-1900 dated coins from the historic fractional genre.  The 20 Lira gold coins were minted to the Latin Monetary Union standard of .1867 ounces per coin, to facilitate cross border trade with the 20 Franc issues of other countries at that time (France, Switzerland, Belgium, etc.).

Umberto I, also known as Humbert I, was King of Italy from 1878 until his death in 1900. He was son to Victor Emmanuel II, who united Italy under a single kingdom during the 'Risorgimento' movement of the 19th century. Umberto I was the only modern King of Italy to die by assassination, killed by the Italo-American anarchist Gaetano Bresci. In history, Umberto I was referred to as "The Good" although he was wildly unpopular throughout his rule with left-wing circles. His assassination was said to be retribution for his praise of General Fiorenzo Bava-Beccaris' restoration of order during an uprising in the city of Milan. In this uprising, Bava-Beccaris used a cannon against demonstrators protesting the rising cost of bread. Two assassination attempts on Umberto I immediately followed, with the third attempt ultimately claiming the King's life in 1900.