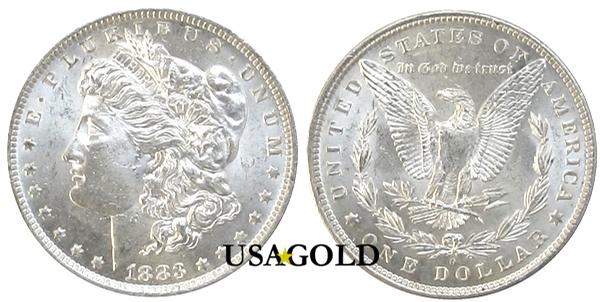 The U.S. Morgan silver dollar is among the most famous, collected and accumulated silver coins ever minted. Produced by the United States Mint from 1878 to 1904 and again in 1921, the Morgan dollar bears a representation of Lady Liberty on its obverse and the American eagle on its reverse. Its monetary predecessor was the legendary Spanish 8 reales (or piece of eight) which circulated in the colonies before the establishment of the United States as a free republic in 1776. The coins were minted at the Philadelphia, Carson City, Denver, New Orleans and San Francisco mints and over the 27 years of its production nearly 650 million Morgan silver dollars were produced. Of that amount, experts estimate that roughly 17% have survived to present. The official silver to gold ratio during the period of the coin's production was sixteen to one meaning that the federal government officially sanctioned a monetary value of sixteen ounces of silver to one ounce of gold. The coins routinely trade individually, in rolls of twenty coins and bags of 1000 coins. It is referred to as the Morgan silver dollar after its designer, George T. Morgan.

A Quick Note on Silver Prices:

The current ratio of gold to silver of roughly 100+:1 represents the most undervalued condition in the market's history.  Even a return to the historic average of 62:1 would have remarkable implications for the silver price.  In fact, widely read technical analyst Clive Maund called the current silver market ‘The most bullish set up for silver that I have ever seen.”  For a more detailed review of silver ownership, we invite you to read our special report linked immediately below.