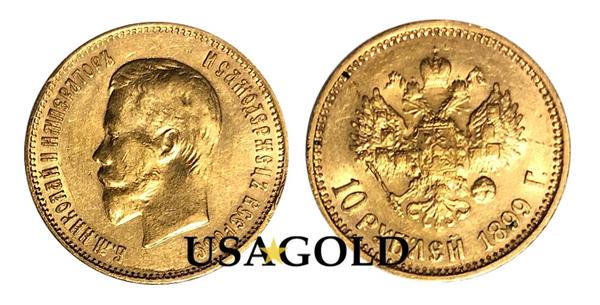 The Russian 10 Roubles of this design type were minted from 1898 - 1911 and are among the rarest Russian coins that can still be obtained for reasonable premiums.   Following an original mintage of roughly 8.5 million pieces, huge swaths were melted down or lost over the last century.  Russian gold coins remain among the most collectible of all historic European sovereign coin issues.

The reverse of the Rouble coin features the device of the imperial coat of arms and seal of 'His Tsarist Majest' - a two-headed eagle (first introduced by Ivan the Terrible) with three crowns to represent Astrahkan, Kazan and Russian. Hanging over the eagle's breast is a shield on which a horseman is lsaying a dragon - a symbol European coin enthusiasts will recognize from the British Sovereing. 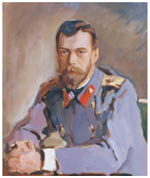 Historical Note:  The ruling Romanov Dynasty, which began in 1613 when Michael Romanov was named Tsar, came to an end 304 years later when Nicholas II (who's visage these coins bear) abdicated under pressure to a provincial government as the Bolsheviks rose to power.  Shy in his youth, Nicholas was never enamoured of his role as Grand Prince, once telling a foreign ambassador that we would have preferred to have been a sailor.  Any pursuit of that interest was forever dashed when he (together with his worife and family of four daughters and young heir) was savagely murdered late one night by the Bolsheviks in 1917, little more than a year after stepping down from power.

These coins reflect a happier time when the Romanovs ruled over a vast territory and became one of the most powerful and wealthy dynasties the world has ever known.  Nicholas, misguided by his mystical wife and the mad monk, Rasputin, was an autocrat who crushed all hope of democratic reform - a circumstance which irrevocably alienated the Russian masses, contributed to his family's fate at the hands of the Bolsheviks, and let later to the even darker regimes of Vladimir Lenin and Josef Stalin.