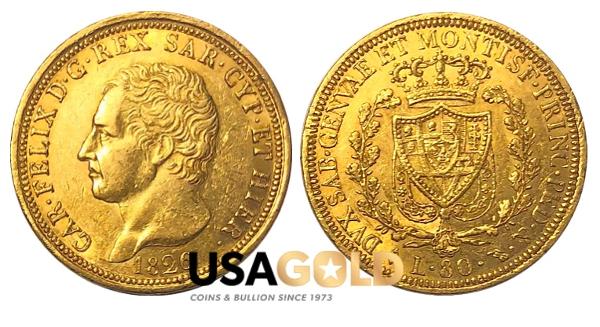 These impressively sized Sardinian 80 Lira gold coins weigh in at nearly 3/4 of an ounce, a feat in itself considering they were minted nearly 200 years ago - at a time when coins of such size made little practical sense in day-to-day commerce.  In fact, they were among the largest coins being minted in the world at the time, dwarfing the largest US gold coin issue of the era - the draped bust $10 - which was just over half an ounce.  And talk about scarce!…minted from 1824-1831, just 163,293 coins were struck, with an unknown though assuredly smaller fraction of those surviving into the modern era.  This tranche features specimens in a remarkably high state of preservation, especially considering they are nearly two centuries old. We would grade them conservatively at XF/AU+ with each coin retaining beautiful original color, a strong strike, and only very slight points of wear, revealing the lion’s share of the original fine detail along King Carlo Felice's hairline and the coat of arms on the reverse.

This is the first time in company history we have had the pleasure of handling this coin, and to our knowledge, this also marks the first time these coins have been offered in bulk to American investors.  These Sardinian 80 Lira are befitting the most discerning of heirloom gold positions, are priced competitively with common U.S. $20 gold pieces, and listed far below NGC suggested retail ($2000 VF/$2800 XF).  With just 130 pieces available, we do not expect this offer to last long and recommend decisive action if you have an interest.  We are offering just one single quantity discount of 1% off for orders of 25 coins or more.  Free Shipping on orders over $10,000, $40 otherwise.  First-come, first-served and strictly limited to available inventory.