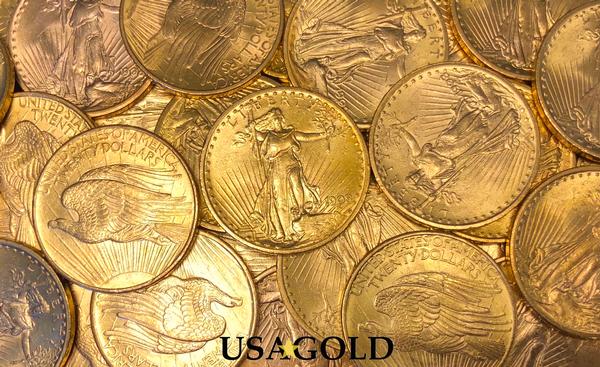 Each coin in our 1908 'No Motto' St. Gaudens hoard is in high grade Brilliant Uncirculated condition.  Coins are priced at a mere $90 over the cost of a modern American Eagle, which is within range of the lowest realized premium on historic $20's ever.  This is a very limited lot of just 100 total coins, and will be filled on a first-come, first-served basis.

For one very special buyer, we are also offering for sale one single 1907 High Relief $20 St. Gaudens (as described in the historical write up below), graded Mint State 64 by the Professional Coin Grading Service (PCGS).  It is priced at $26,000, a $2500 discount to suggested retail.

The 1908 ‘No Motto’ St. Gaudens tells about as interesting a story as you’ll find when it comes to the history of money in America. Toward the end of his first term, President Theodore Roosevelt made it a personal quest to beautify American coinage.  He wrote to the Secretary of the Treasury at the time: "I think the state of our coinage is artistically of atrocious hideousness. Would it be possible, without asking permission of Congress, to employ a man like Saint-Gaudens to give us a coinage which would have some beauty?"

In 1905, Roosevelt got his wish, as Augustus St. Gaudens privately agreed to become the first ever non-mint employee to design U.S. coinage.  He was tasked with redesigning those coins that didn’t require congressional approval to be changed - the four gold coins ($2.5, $5, $10, & $20) and the cent.  Roosevelt was quite particular about the way the coins would look, especially the $20 gold piece, insisting on a ‘high relief’ design, noting the most beautiful coins of Ancient Greece were struck that way.  He also insisted on the removal of the phrase, “In God We Trust”, feeling the motto’s presence on the coins was a debasement of God’s name, as the coins could be spent to further criminal activities.  St. Gaudens was happy to oblige as he felt the motto distracted from the overall design.

In the end, the project experienced many delays.  The biggest hang up surrounded the number of strikes it would take to bring about the desired high relief of the coins during the minting process, and the burden on the mint to replicate the process en masse.  But in late 1907, an impatient and adamant Roosevelt demanded the coins be struck according to St. Gaudens set of dies, ‘even if it takes you all day to strike one piece!’  The mint eventually stuck just over 12,000 ‘High Relief’ $20 gold pieces that were released into circulation in 1907 and 1908.  Roosevelt was so pleased with the design, he wrote to St. Gaudens shortly before his death in 1907, "I have instructed the Director of the Mint that these dies are to be reproduced just as quickly as possible and just as they are. It is simply splendid. I suppose I shall be impeached for it by Congress, but I shall regard that as a very cheap payment!”

Despite Roosevelt’s clear preference, the “High Relief’ debate was far from won.  The mint’s chief engraver, Charles Barber, maintained that no mint would be capable of producing coins of such relief in a single strike - a necessity to produce the coins in large quantities - and insisted on creating a more manageable 'low relief' design.  In December 1907, with the blessing of the SuperIntendent of the Philadelphia mint, Barber ordered mass production of the coins on his replicated dies, and for the pure sake of mint efficiency, the last of the “High Relief” varieties were struck.

The uneven start for the St. Gaudens gold coins worsened mid-way through 1908.  There was a public outcry over the absence of the Motto “In Gold We Trust” on the coinage, and an outraged and furious Congress ordered the Motto returned.  Barber obliged and the latter half of the coins minted in 1908, and all coins from then forward, carried the Motto.  Only the 1907 and 1908 St. Gaudens can be found with the Motto omitted, making these 1908 “No Motto” St. Gaudens an historically significant and memorable addition to any gold portfolio - especially at these prices!