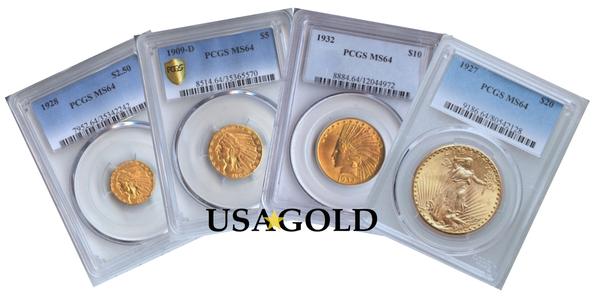 All graded by PCGS or NGC
Highly Popular Semi-Numismatic Items

Featuring the four prominent gold coins in circulation in the late 19th and early 20th centuries, our United States four-coin type sets offer the opportunity to purchase an important piece of American history at cyclically low prices.  We offer these sets in the very collectible Mint State 63 and 64 grades – a high state of preservation with pleasing visual appeal.  The $10 Indian and $20 St. Gaudens gold coins were designed by famed sculptor Augustus St. Gaudens under the direction of Theodore Roosevelt, who, in 1907, sought to 'beautify American coinage'. The $5 and $2.5 Indian coins were designed by Bella Pratt, who stepped in after St. Gaudens death in 1907 to complete the series. Christian Gobrecht designed the earlier Liberty type. All our sets are graded by PCGS and/or NGC – the two most widely-accepted independent grading services and include common-date items from the largest mintages or surviving populations.

Only roughly 15,000 coins of the $5 Indians have achieved grade Mint State 64 when combining both PCGS and NGC graded coins.  As such, a maximum of just roughly 15,000 four coin sets can even be completed in Mint State 64, though far few likely do exist intact, as numerous coins are owned outside the context of a 'set'.