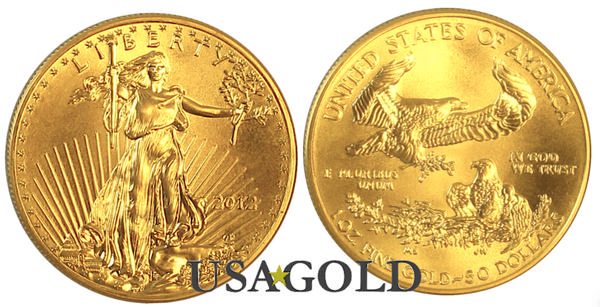 The American Gold Eagle bullion coin is the most popular among investors in the United States. Over 13 million of the one-ounce coin have been minted and distributed since the coin was introduced in 1986. In 2009 alone, 1,493,000 American gold eagles were produced. In 2008, at the height of the credit-financial crisis, the mint was forced to go to an allocation system because it could not keep up with burgeoning demand. Still, it produced 710,000 one-ounce coins during the course of the year. By way of comparison, the U.S. Mint produced a little over 140,000 one-ounce coins during the relatively quiet year of 2007.

The 1986 American Eagle began life as an idea presented by Congressman Ron Paul to President Ronald Reagan's Gold Commission in 1981. Congress enacted the "Gold Bullion Act of 1985" and quickly thereafter the Eagle became one of the most popular gold coins in the world. The Gold Bullion Act stipulates that the gold used for producing American Eagles comes from newly mined sources within the United States.

The obverse depicts lady liberty striding from the coin -- a reproduction of Augustus St. Gaudens' famous design for the Double Eagle commissioned by President Theodore Roosevelt in the early 20th century. The reverse displays a family of gold eagles with the male carrying an olive branch and flying above the nest, the fine gold weight of the coin and its face value.

American eagles are legal tender coins minted in one-ounce, half-ounce, quarter-ounce and tenth-ounce sizes. Produced at the West Point Mint, it is an alloyed coin at 22 karats, or .916 fine. The 1986 to 1991 mintages have Roman numeral dates. Arabic numeral dates are used on successive mintages.