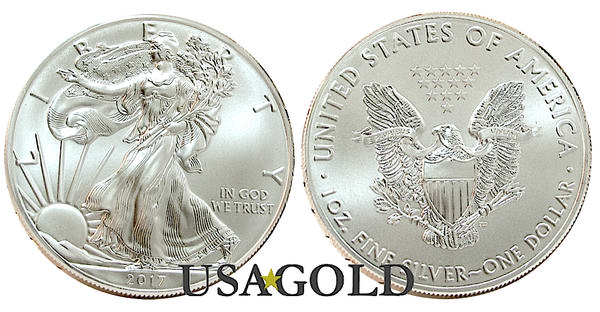 American Silver Eagle Coins have been produced at the United States Mint at West Point and sold in both proof and bullion finishes since 1986. They have always featured a rendition of sculptor Adolph A. Weinman's magnificent Walking Liberty design, originally prepared and executed for the Nation's first circulating half-dollar coin in 1916... widely considered one of the most beautiful American coins ever minted.

Aside from the proof version, the United States Mint does not sell American Eagle Bullion coins directly to the public. Instead, the Mint distributes uncirculated Bullion coins through a network of wholesalers, brokerage companies, precious metal firms, coin dealers, and participating banks, a network known as Authorized Purchasers. A bullion coin is a coin that is valued by its weight in a specific precious metal. Unlike commemorative or numismatic coins valued by limited mintage, rarity, condition and age, bullion coins are purchased by investors seeking a simple and tangible means to own and invest in the gold, silver, and platinum markets."

A Quick Note on Silver Prices:

The current ratio of gold to silver of roughly 100+:1 represents the most undervalued condition in the market's history.  Even a return to the historic average of 62:1 would have remarkable implications for the silver price.  In fact, widely read technical analyst Clive Maund called the current silver market ‘The most bullish set up for silver that I have ever seen.”  For a more detailed review of silver ownership, we invite you to read our special report linked immediately below.