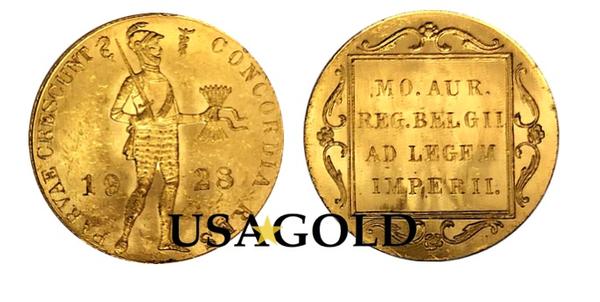 For our April special, we are pleased to offer this batch of Netherlands Trade Ducats in Brilliant Uncirculated, Proof-Like condition.  We originally had a line on an estate selling these Trade Ducats back in January and picked up couple thousand that we ultimately placed easily through private offers at that time.  As gold demand started to explode a few weeks ago, we followed up with our source from January and purchased every last Ducat the estate had, which amounted to just under 2500 additional coins.  As of this writing, we are down to our last 1000 or so coins.

Extreme shortages remain in the physical market, with most dealers either completely sold out or asking astronomical premiums for similar sized fractional products like 1/10 ounce American Eagles.  Our advanced planning and aggressive inventory positioning made this special possible, but to make it truly 'special' we are pricing these coins competitively with current Wholesale Ask for 1/10 ounce US Eagles on a per ounce basis (the Ducats are just below 1/9 ounce - .1106 ounces each).

All said, this represents an unparalleled opportunity in today's market to add divisible, fractional product in a high state of preservation to your holdings at a very competitive premium.  And perhaps most importantly, this group is in inventory and ready to ship (with consideration to depository shipping delays due to volume).

It is also worth noting that though Netherland Trade Ducats have been minted into the modern era, all coins offered here are dated prior to 1933, securing for owners all the additional protections and designations associated with coins from the gold standard era.

Historical Commentary: Coveted for their beauty, the Netherlands Trade Ducats are some of the hardest to find and most highly sought after of the historic European gold coins.  A great many were lost during years of circulation, making the Proof-Like Brilliant Uncirculated specimens offered here truly noteworthy.  Moreover, their negotiable size (just over 1/10 oz) is sure to attract asset-preservation minded investors seeking enhanced divisibility and dynamic liquidity within their holdings.

The first Netherlands trade ducat was issued in 1487 under Phillip the Fair and a coin very similar to the one depicted above has been minted more or less continuously from the early 1600's on.  The net fine weight of 3.5 grams of gold never changed to the modern era.  The trade ducat is minted as a gold bullion coin even today.  One the Venetian ducat has enjoyed greater longevity.

The obverse of the famed ducat coin depicts a knight holding a bundle of arrows signifying the unity of the six northern provinces under the 1579 Union of Utrecht - a declaration of independence from Spain.  The motto Concordia Res Parvae Crescunt translates to "the union makes small things grow."  The legend on the reverse tnraslates to "money of the provinces of the United Netherlands according to the law of the empire."