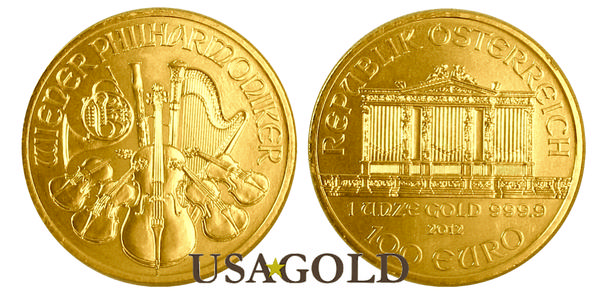 The Austrian (also Vienna) Philharmonic is the best-selling gold coin in Europe. Attesting to its international popularity as one of the "pure gold coins" the Philharmonic led sales worldwide in 1992, 1995 and 1996, according to the World Gold Council. In 2008, at the height of the worldwide credit-financial crisis, more one-ounce Philharmonics were sold on a global basis than U.S. Eagles or Krugerrands. Like its competitors, the Philharmonic tracks the gold price and is internationally liquid.

As already mentioned, the Philharmonic is struck in pure, 24-karat gold. The obverse of the coin depicts the great organ in Vienna's concert hall, home of the famed Vienna Philharmonic Orchestra. The obverse shows a harmonious medley of musical instruments -- a string base, cellos, violins, a bassoon, harp and Viennese horn. The Philharmonic is minted in one-ounce (troy), half-ounce, quarter-ounce and one-tenth ounce sizes with successive face values of 100, 50, 25 and 10 euros respectively. Earlier mintages before the creation of the euro were denominated in schillings.

In 2004, the Austrian Mint issued a 1000-ounce gold Philharmonic to mark the 15th anniversary of the popular bullion coin. It has a face value of 100,000 euros. Fifteen coins were struck and they sold out within two weeks of offer. The relief on the coin was sculpted by computer and finished by hand. Each coin took 130 hours to mint. Not to be mistaken for pocket change, the 1000-ounce Philharmonic is listed in the Guinness Book of World Records as the world's largest gold coin.