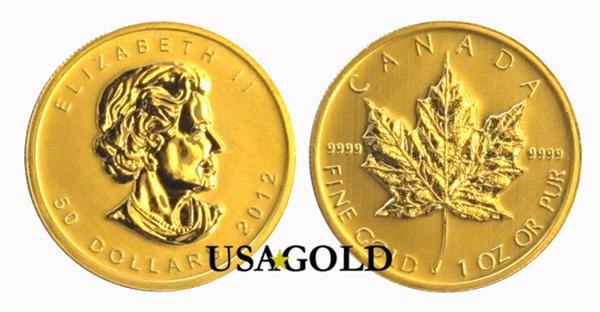 Canada made its entry in the competitive bullion gold coin market in 1979 with the Maple Leaf, the first pure gold bullion coin -- a concept which quickly garnered a significant share of market interest. In early advertisements, Maple Leaf coins were pictured flowing from a gold bullion bar -- an artifice which effectively made the point that bullion gold coins' pricing was related to the spot price. At the time of its unveiling, the Maple Leaf's only competitor was the South African Krugerrand -- a coin alloyed with copper to 22 karat. It is produced in one-ounce, one-half ounce, quarter-ounce and one-tenth ounce sizes.

Early Maple Leaf bullion coins were minted at .999 purity, but in 1982 the Royal Canadian Mint went to the .9999 pure gold coin -- the standard to which it produces coins today. Each coin bears the .9999 purity stamp along with the date, the weight and the face value. The Canadian Maple Leaf is a legal tender gold coin -- a status that allows it to be used as currency and in debt settlements. The earlier issues with the .999 stamp trade at a discount to the later mintages.

The Maple Leaf gold coins were a major beneficiary of the credit and financial crisis which began in 2008. That year the Royal Canadian Mint reported an unprecedented jump in bullion coin sales -- from 278,600 ounces in 2007 to 896,000 in 2008. Whereas the other national mints had trouble keeping up with demand, the Winnipeg mint seemed much better equipped to deal with the onslaught, and Maple Leaf availability remained steady throughout the 2007-2009 period.