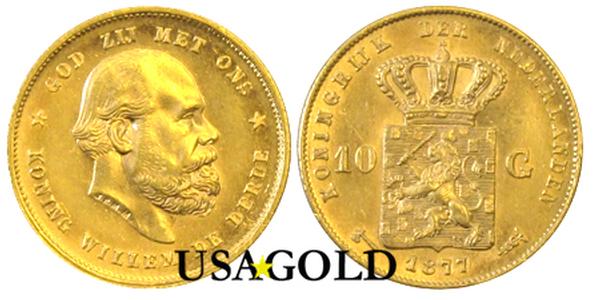 Price Match Offer:  USAGOLD will match pricing from competitors on Netherlands 10 Guilder "King Willem" gold coins when all three of the following conditions are met:  Products are offered in equal or better condition (i.e., Brilliant Uncirculated);  Products are offered in an identical date range (i.e., pre-1933); Products are actually in stock (i.e., We will only match price up to the confirmed quantity available for sale).  Please call with your inquiry. 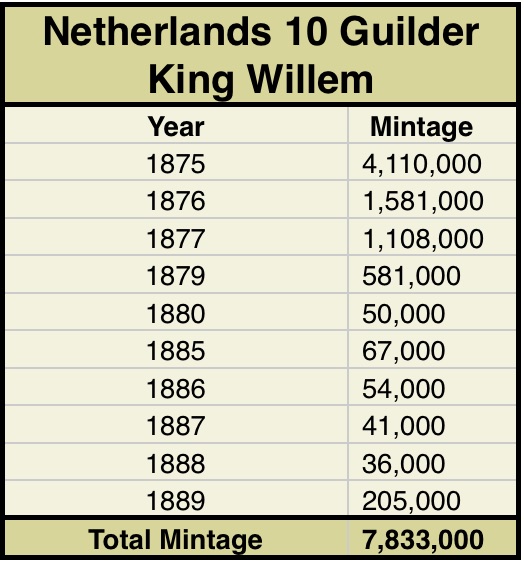 The older, scarcer King Willem variety Dutch 10 Guilder gold coins are much more difficult to obtain than the better-known Queen Wilhelmina 10 Guilder gold coins also offered at this site, though, rather suprisingly, a good majority of the 'Kings'  that show up in the market are in high-end uncirculated condition.  With a total mintage of under 8 million pieces (see mintage figures to right), predominately in the 1870's, they are one of the least expensive and oldest pre-1900 foreign fractional scarcities available in a high state of preservation, making them a very popular portfolio inclusion when available.  The obverse depicts King Willem III, a ruler known for his autocratic tendencies. England's Victoria referred to him as the 'uneducated farmer.'  He died in 1890 leaving the throne to his precocious daughter, Wilhelmina.

Holland is most famous in financial history for its Tulipmania in 1637 -- the prototype financial bubble against which all other bubbles will forever be measured. The price of one special, rare type of tulip bulb called Semper Augustus was 1000 guilders in 1623, 1200 guilders in 1624, 2000 guilders in 1625, and 5500 guilders in 1637. Shortly thereafter, the bottom fell out on the market and prices plummeted to 1/200 of their peak price.

Though tulip bulbs have spent the last 366 years in happy financial dormancy, the more contemporary mania involving stocks and irredeemable paper money continue to crop around the globe with disturbing regularity. A Dutch newspaper reported in 2002 that there now exists a tulip appropriately named Dow Jones, and advised that stock market investors might consider cashing in their holdings and investing the proceeds in (you guessed it) . . . tulip bulbs. It seems they are once again on the upswing. History teaches us that gold coins, like the Dutch 10 Guilder, protect one's portfolio against such mania.