Price Match Offer:  USAGOLD will match pricing from competitors on Netherlands 10 Guilder "Queen Wilhelmina" gold coins when all three of the following conditions are met:  Products are offered in equal or better condition (i.e., Brilliant Uncirculated);  Products are offered in an identical date range (i.e., pre-1933); Products are actually in stock (i.e., We will only match price up to the confirmed quantity available for sale).  Please call with your inquiry. 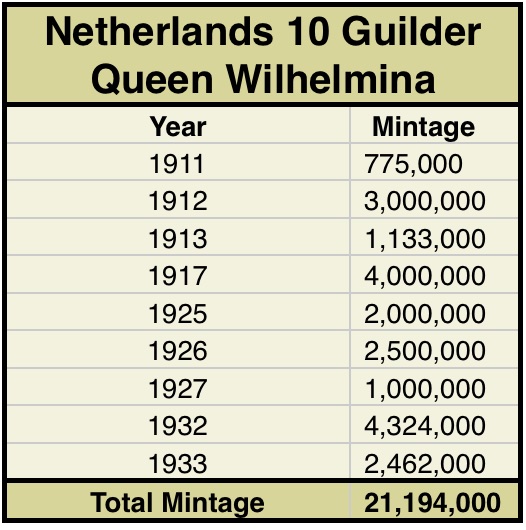 The Netherlands 10 Guilder Gold Coins are one of the most popular and highly sought-after pre-1933 European gold coins.  At roughly one fifith of an ounce, they trade for comparable premiums to modern bullion coins of the same size, are highly recognized and liquid in international markets, and move in direct concert with the gold price.  The Queen varieties offered here feature Queen Wilhelmina on the obverse of the coins, and are informally referred to as 'Dutch Queens'.  Total mintages on Dutch Queens (see table to right) are modest, contributing to their affordability, but still notably less than the most common European issues of the era (Sovereigns for example averaged mintages over 30 million per year, versus the roughly 22 million Guilders struck total during just 9 years of production).

Holland is most famous in financial history for its Tulipmania in 1637 -- the prototype financial bubble against which all other bubbles will forever be measured. The price of one special, rare type of tulip bulb called Semper Augustus was 1000 guilders in 1623, 1200 guilders in 1624, 2000 guilders in 1625, and 5500 guilders in 1637. Shortly thereafter, the bottom fell out on the market and prices plummeted to 1/200 of their peak price.

Though tulip bulbs have spent the last 366 years in happy financial dormancy, the more contemporary mania involving stocks and irredeemable paper money continue to crop around the globe with disturbing regularity. A Dutch newspaper reported in 2002 that there now exists a tulip appropriately named Dow Jones, and advised that stock market investors might consider cashing in their holdings and investing the proceeds in (you guessed it) . . . tulip bulbs. It seems they are once again on the upswing. History teaches us that gold coins, like the Dutch 10 Guilder, protect one's portfolio against such mania.

Queen Wilhelmina, no-one's fool, ascended the throne at a young age after the parliament passed a special law allowing a woman to become monarch. She first displayed an incisive intelligence during a meeting with the powerful Kaiser Wilhelm II of Germany prior to World War I. Wilhelm boasted to the young Wilhelmina that "my guards are seven feel tall and yours are only shoulder high to them." To this she replied politely: "Quite true, Your Majesty, your guards are seven feet tall, but when we open our dikes, the water is ten feet deep!"

Later, Wilhelmina would display this same acumen in the world of business and finance. She amassed a fortune through various business dealings and investments that surpassed a billion dollars, making her the first female billionaire in history. She moved throughout her life in the highest circles of international finance. Known for her spunk, she called Adolf Hitler "the archenemy of mankind" after being forced to leave Holland for England during the German invasion. In 1953, when the country was devastated by floods, she bicycled the countryside at 73 years of age offering hope and inspiration to the Dutch people. Her rule lasted a remarkable fifty-eight years. This series -- both the king and queen varieties -- remains a popular addition to accumulations in both the United States and Europe.